All races from multiple regattas in one series, with DNC etc per regatta

I think that there might be a way to do this, but it will take some work. You would create unique letter scores for each series and hard code the points based on their points in the particular GP regatta. ie. DNC_1= 16 points and DNC_2=21 points. The new letter score code would have to be assigned to the existing results.
See below: 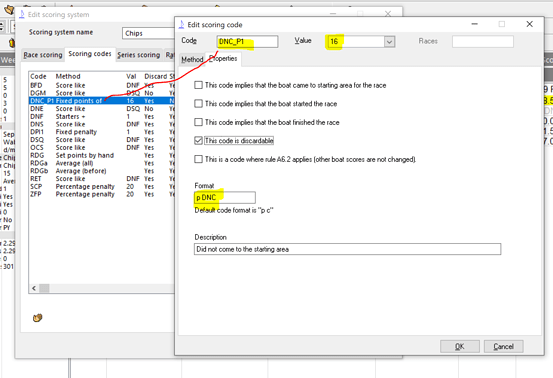 However, I’m not sure what happens if the 4 regattas don’t have the same sailors in all events.

You could certainly do something as Peter suggests.
This might be of interest to you if you look at these results. Which is a very similar situation
https://www.windsurfingresults.co.uk/FormulaCup2018.html
Here there a 4 events. Stokes Bay, Bridlington, WPNSA and Christchurch
For competitors that turn up at the event they get an EDNC (Event Did Not Compete) otherwise they get a DNC which is for the the series
Here all you need to do is change the DNC to EDNC for all the competitors that were at that event and create a code EDNC as below 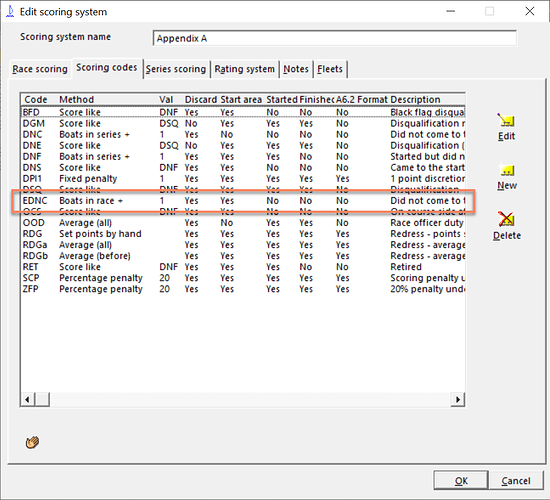 Thanks for two prompt responses.

PvM4RM - that was my current best thinking as well. However, it got slightly more messy since you would have to do DNS-1, … as well. Not a major issue though.

Jon - the Formula Cup solution looks like a very promising option! However, with scoring set to “boats in race + 1” I don’t see how it sets the same point for all races in the same regatta (and different between the regattas)

So - do you have that .blw? I didin’t find it at Sailwave results folder. And if there’s an old thread about it that would of course help as well. I think we will use this a lot at our club if it works out as promising as it looks

I’ve attached the file for you to play around with. It works because the others are not in the race.

I developed this idea to score what was needed

Thank you! With this example and trying it out myself it became perfectly clear

Perfect solution - I also set points method for DNC to “Boats in race + 1”, and changed Format of EDNC to DNC. So, in results both EDNC and DNC are shown as DNC, and all of them scored according to the number of regatta attendants + 1.

Probably silly follow-up question, but I can’t find the answer - How do i escape reserved characters in Format expression?

Use case: I wan’t EDNC code to show as DNC. My intuitive solution was of course to set Format to “p DNC”, but then it interprets C as upper case code (in this case EDNC, so I end up with for example “22.0 DNEDNC”. Can I escape the C being treated as a reserved character?

I think it would be very confusing to have 2 different codes displayed as the same thing but producing different points - I don’t think that would be good practice. The format field is intended for formatting the result not for changing its name.
If you really wanted to change them you could write an effect that would change the EDNC to DNC

Good point, but the reason here is that I need two DNC codes, EDNC stating that the boat showed up at start area and DNC that it didn’t (i.e. the usual DNC code). Both are then scored with (#boats coming to start area + 1), and boats participating in regatta but not in race get EDNC instead of DNC. Thus, the points are in effect given by “#participants in the regatta + 1”.

So, is it correct that it’s not possible to write out a C using the Format setting?
I’m not sure how to apply an “effect”, but I will look into that otherwise.

See example below where all races in regatta spanning R8 - R18 are given 33 points for DNC/DNF/DNS/…, since there are 32 boats with result as if "coming to start area) 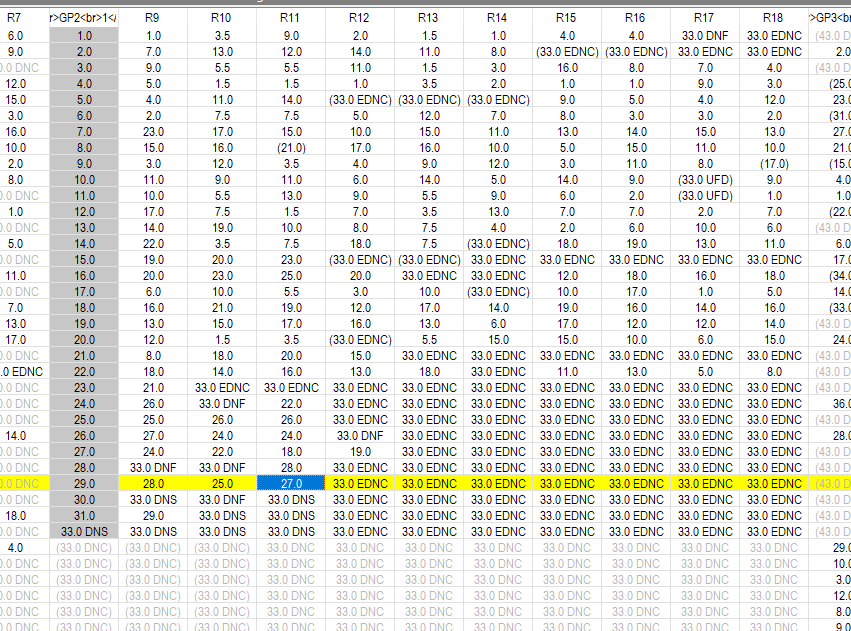 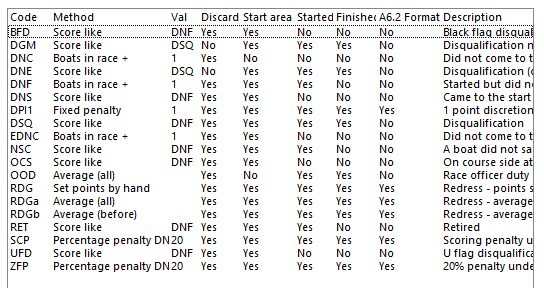 So typically if they attended by didn’t manage to race they got a better score than someone who didn’t even turn up.

In your example above you have set them to be the same
If you want them to be both displayed as DNC you could do that with an effect by I think it would be confusing and don’t see the advantage.
Could you perhaps clarify what you are trying to do

The series is finished now, so here is an example (I have removed a lot of sailors and races, to make it easier to digest).

There were 4 regattas, with 3, 4, 2 and 3 races respectively. For each regatta, sailors attending the regatta has gotten code NC if they didn’t compete (instead of DNC). Sailors who did NOT attend the regatta at all got DNC.

When scoring, the scoring for DNC and NC (as well as DNF and other codes scores similarly) are scored by “Boats in race + 1”. The difference between NC and DNC is that NC is set to “Start area = Yes”, meaning that they are included in “Boats in race”. They are still set to “Started = No” though, in comparison to DNF. 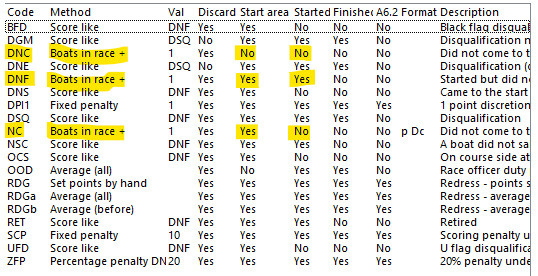 The format of NC is set to “p Dc”, in effect meaning that they will show as “p DNC”. So when scored, both DNC and NC will show up as DNC. When scored, the table looks like this:

So, the overall effect is that “Boats + 1” gives points according to total amount of participants in the regatta, but each regatta has its own “Boats +1” value, which was the wanted effect. I don’t value whether that is wanted or not here - it has both merits and drawbacks. I’m open for discussing that in a future post though 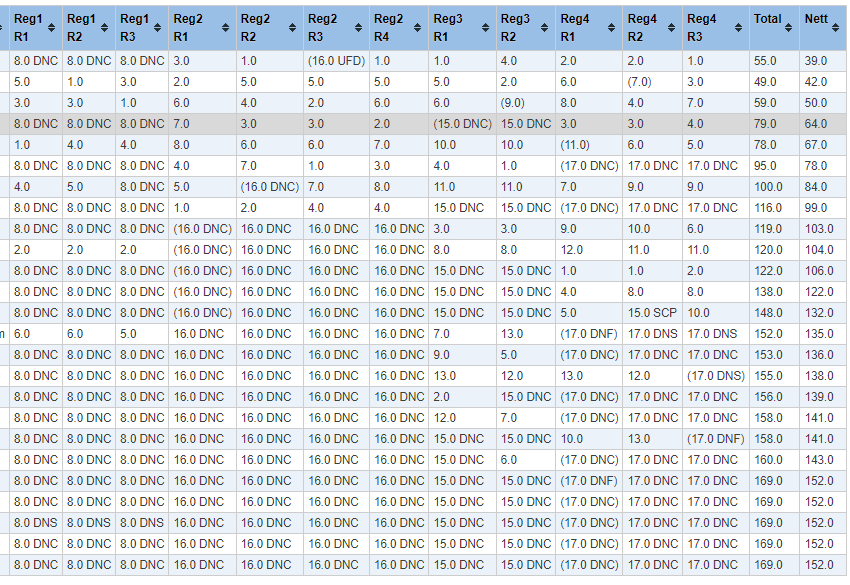 Hi Pontif,
Please forgive me if I’m missing something but I can’t see what the NC code is doing, it is exactly the same points as DNC in all cases. As I see it if you replace the NC code with DNC you get exactly the same results.
In my case with the EDNC this has a different number of points than the DNC.
Jon

No excuse needed whatsoever, if you missed it it’s because the explanation was too vague

Notice how the points for NC/DNC/DNF differs from race to race - it’s dependant on how many came to the start area of that specific race. Compare this to the results above, where NC had “Start area”=Yes, and you see that NC/DNC/DNF points are the same throughout each of the four regattas. The reason for this is that within a regatta, ALL sailors who attended the regatta but didn’t attend a specific race got NC - so each race in a given regatta will have the same number of competitors with “Start area”=Yes, namely the number of competitors in that specific regatta.

Now take a look at one specific regatta. The points awarded for NC/DNC/DNF is the same as it would be if ONLY the races of that regatta was included in the series, and the scoring code was set to the ISAF Appendix A standard of “Boats in series + 1”. So this mimics scoring each regatta separately, and then “Merge/match competitors and append points” (which would, imho, not be a desired option since it wouldn’t be possible to make modifications and rescore such a merged series, which I think is the major point of the application).

So, by introducing NC, I basically allow for controlling which competitors was part of each individual regatta and set points for a given code in every race in that regatta according to that number of competitors.

If this still doesn’t make sense, and you are keen on understanding the use case, I propose a Teams meeting or similar