I wonder if someone would be good enough to help with a query regarding the ordering of average lap results. I believe I’ve set up the BLW file correctly but I am being queried that the results are not being displayed in number of laps order (e.g. 5 then 4, then 3) when published. If the file is setup correctly then I need to find a way to explain why the are ordered in the way they are.

Many thanks.
Dinghy Handicaps Series.blw (284.0 KB)

I have had a quick look at the file you attached.

I notice that you have not selected a handicap rating system. Also I was expecting to find some competitors and results.

The way average lap racing works in Sailwave is by multiplying the elapsed time in seconds by max no laps completed by a boat and dividing by the number of laps completed each boat. For example:
Boat A completes 5 laps in 1 hour (3600 seconds)
Boat B completes 4 laps in 50 minutes (3000 seconds)

Sailwave then applies the handicap corrected time calculation that has been choosen.

Hello Huw, thank you foe taking the time to look at my post. I do find what you’ve said about the file I uploaded a little perplexing though. I’ve downloaded the file I uploaded, opened in SW and it all looks as I expected with Sail Nos, 8 Races, PY Nos, RYA Portsmouth selected as the Rating System. I did remove the Helm & Crew names to preseve some anonymity, for the sake of GDPR.
I’ve attached a couple of screen shots showing how I’d expect the file to look in SW. 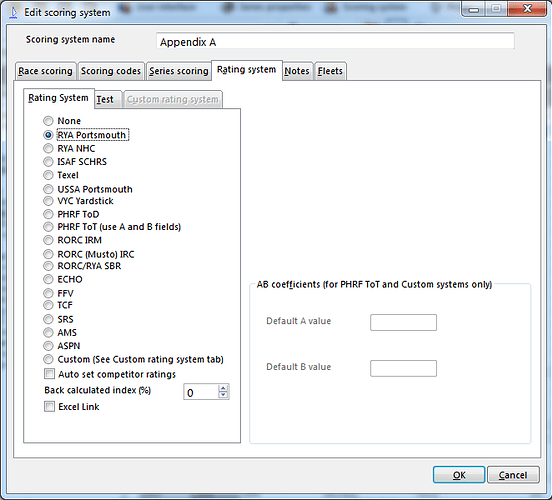 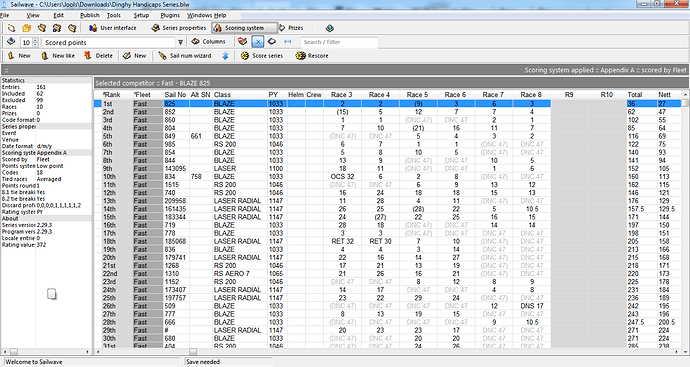 I understand the RYA formula used to calculate the corrected times, my question is just looking at, say, race 7 in the screen shot of the published resilts would you expect the results to be ordered the way they are with regard to the Laps column with 3 lapper boats intermingled with 4 lapper boats? 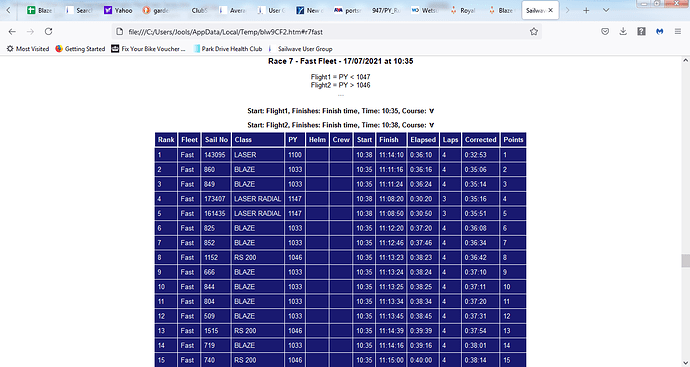 The file looks fine to me scored as RYA

Results are sorted by points based on Averaged Corrected time so as Huw says all results are calculated averaging time so each boat appears to have completed the max laps sailed by any boat. In your case 4 laps

Note the corrected time calculated for 3 laps would have been - 26:27

Thanks for your reply, somehow you’ve managed to get across a crucial element of AL sailing that I was missing - namely that the calculation ‘pretends’ that all boats sailed the same (most) number of laps. So where I’d followed the RYA calculation I clearly didn’t fully undertand it.
Many thanks indeed.

Out of interest, could you see the contents (races, rating system, etc.) of the BLW file that I posted, or were you just going off the screen shots?

I have downloaded the file you posted again and this time it contains data. I don’t know what happened the first time.

I hope that helps.

Brilliant! Thank you, it does indeed help.

I’ll take this back to my RO and explain.

The reason for increasing elapsed times up by the ratio of max laps sailed by any boat divided by laps completed by each boat before applying the rating calculation is that there are less possibility of there being identical corrected times.

Average lap time is a misnomer but the term is used by the RYA. They used to have available a guide to such races. I have a copy somewhere in my archives.

Also note that Average lap racing is based on the boats all sail exactly the same lap, so there should be a gate that all boats pass through each lap and that gate is the start & finish line.

I found a paper copy of the guide that was written back in 1998!
I have scanned it and saved as a PDF which is attached to this post. The original document is in A5 booklet format which looks odd when you look at the document in a PDF viewer but when I printed on my printer double-sided it printed properly. You may if printing a copy not get the same result unfortunately as printers differ.

You might find the information useful.
Kind regards,
Huw

Hi, there is still a doc available via the RYA site, if you search carefully enough, or directly available here;

You’ll need to paste the above URL into your browser address bar, as the forum doesm’t want to provide a preview.

An Internet search revealed this link to the 2007 version of RYA Average Lap Racing Guide:

Weird, again. I can still get access, so I’ve d/l’ed the doc and attached. I don’t suppose there’s a lot of difference between them.

average lap time is a misnomer

I suppose it came about because you calculate the average lap time for each boat and add the requisite number of averaged laps to each boat’s elapsed time, sometimes none of course. But it does make it sound as if you should score the boats by the average time to complete a single lap. The end result would be the same anyway I think.

Hi Jim et al,
The reason Sailwave does not 'score boats by the average time to compete a single lap’ is to reduce the incidence of corrected times, after rounding according to RYA procedure, being equal.

I received the following from the chair of the RYA Race Management Advisrory Panel in answer to a question I received via email from a Sailwave user, on two Lasers being given the same corrected time even though they had recorded finish times 1 second apart.

"I believe Sailwave has scored the boats correctly according to the rule in the Portsmouth Yardstick scheme. That explicitly says that decimals of a second are to be rounded to the nearest second. Because the PY of a Laser Radial is more than 1000 (= 1147) boats that finish one second apart on elapsed time will finish less than one second apart on corrected time (~0.87 seconds apart in fact), and hence may have the same corrected time when rounded to the nearest second as has happened in this case (2064.52s vs 2065.39s both of which round to 2065s). In that case, since they have the same corrected time they are tied, and it is correct to give them the average of the points for the relevant places.

I see no legitimate reason to change the elapsed or corrected time of either boat to change this result ex post. A boat that finishes ahead of another in a handicap race has no legitimate expectation that they will finish ahead (rather than tied) in the final results. The boat that finished a second later has every right to be scored as tied with the boat ahead given that that is the correct result (in my view) under the rules of the Portsmouth Yardstick scheme, notwithstanding that the two boats are of the same class.

If you want to avoid a tie in this situation then I think you need to say in advance (in the NoR and/or SIs) what scheme you are going to use to avoid that. But as this example shows, it is not obvious how you do that i.e. which of the two Laser Radials do you say has tied with the Optimist? One option might be to say that you will not round corrected times to the nearest second, but perhaps to the nearest tenth of a second, but in that case why aren’t you also recording elapsed times to that same level of precision? (Answer of course being that it is practically impossible to do that by eye when sighting along a finishing line)”