We use high point scoring for our frostbite fleet, both for a single day’s results as well as the series results. Last week I had a situation where one sailor was not recorded on the score sheets for one race. While waiting for feedback from the RC and others, I experimented with a few options for this sailor. One was to put in a tie at one finishing position where the missing sailor was believed to finish. We ended up with a different solution, but it did pop an issue in Sailwave…

Our custom formula is (f-p+1+1)/(f+1), but I do not think this is the culprit.
Has anyone else encountered/reported this?

This looks correct to me as the 9 points and the 8 points have been split between the two.
Using your formula they both got equal points as per the formula

If you use the test formula button

Do you get the expected results?

Hi Jon! Thanks for the response and Happy New Year to you also!

I may be using the tool incorrectly, but I cannot get that type of result. I do not have a custom list of points, only the formula. If I enter two sailors with the same finishing position, they do not get equal points. 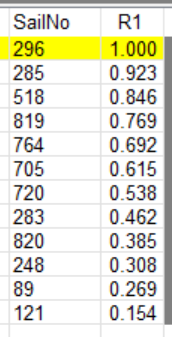 I downloaded your file and opened it and I got the same scores you did.
Then I cleared the results for the two boats (right-click the result box
and select “Clear result”) and re-entered the finish positions again
(they were both 10 before and so I just entered 10 again under “Edit
result”). Now the boats got the same score of 0.269. So, I think there
is something wrong with the entered results though I’m not sure what it
is. [Using “Set place of” made no difference unless I first cleared the
existing results so it seems the currently entered results are the problem.]

More search found the problem. For boat #248 there is a scoring code of
“RDGa” that is causing the issues. The problem disappears if I “Edit
result” and manually clear that box or if I “Clear result” (which clears
the box) and then input a finishing position. I’m not sure why the
scoring code makes a difference even though the scoring code button is
not selected.

If boats are tied at the finishing line or if a handicap or rating system is used and If the protest committee decides to give redress by adjusting a boat’s score, the scores of other boats shall not be changed unless the protest committee decides otherwise.boats have equal corrected times, the points for the place for which the boats have tied and for the place(s) immediately below shall be added together and divided equally. Boats tied for a race prize shall share it or be given equal prizes.

I did have an RDGa code in for sail # 248, and as Art found that was affecting the results even though I had unselected that option and provided a finishing place. I confirmed that removing that code provided the correct results. Looking at the modified file uploaded by Jon, it appears he made the same change.

I agree that if the RDGa code was in play and this was the only race, then the scores were correct. However, the RDGa code was not in play (being “deselected”) so I consider this an error in the programming.
Further, in the full file, this one race’s results were the same but there were 7 other races, and 248’s average for the day was not 0.308.

I tried entering DPI1, RDG, RDGa, RDGb, SCP and ZFP and even though
unselected they all provide the same error (none of the other scoring
codes in my version caused an error). I agree with Tim that this is a
programming bug although there is an easy workaround - to make sure the
unselected box for the scoring code is blank (select, clear, then
unselect). I use version 2.9.7 but it sounds like the same issue arises
in later versions. Clearly, there is some flaw in the logic order which
causes an error when the problematic codes are entered but not selected.

So, #89 is correct with the score for a place of 10.5 but #248 is
sometimes getting a wrong score of points for 10th place when some of
the scoring codes are in the space for scoring codes but unselected.

I’ve thought about this and I think it is questionable as to whether
redress (which is not relevant to the actual scoring) could ever provide
the scores produced (I’m pretty sure none of the other codes could).
Some thoughts on a hypothetical award of redress:

Option #1 - Assume the PC says nothing about changing the scores of
other boats so A6.2 applies and the score for #89 doesn’t change. Then
both boats get 0.308 points as the score for 10th. So, the produced
scores would not result.

Option #2 - Assume the PC says “scores can change based on the redress”
but fails to say what to do with the score for the existing boat in 10th
(#89). [As a scorer, I’d consider this an “oversight” or “mistake” by
the PC and go back for specific instructions on what to do with #89. RRS
A6.2 says the PC can “decide otherwise” but I think that means the PC
must be specific. They cannot just leave it up to the scorer to decide
on what score to give, the scorer doesn’t have that authority. So, I
don’t think the scorer can score without more information from the PC
about what to do with #89.]

A. One way to look at this would be to say “since other boats can change
#89 should move down to 11th with a score of 0.231.” Again, the produced
scores would not result. I should think this is the default but as
scorer I’d want to get confirmation from the PC as there are other at
least theoretical possibilities.

B. An alternative would be to say "since the scores of boats can change
as a result of the redress there are now 2 boats tied for 10th and they
should both get “tied points” of 0.269. The produced scores would not
result. This certainly seems a reasonable outcome but since it is
different from A (what I tend to think should be the default) I think
confirmation from the PC is definitely needed.

C. A third option would be to say “since the scores of other boats can
change then #89 is now tied for 10th and should get the tied points of
0.269 while #248 should stay at full points for 10th with 0.308 because
that is what the redress was.” This would result in the produced scores.
I think this kind of defies logic and I doubt any PC would actually want
this to happen though anything is possible. I think that as a scorer you
would absolutely need specific directions from the PC to so this.

The bottom line is that no “default” scoring with redress could result
in the produced scores. I think you’d need to have a specific direction
from the PC and I frankly think a PC would never pick alternative C and
would always go for either A or B. Personally, I think the general
assumption is that if “scores of boats can change” then A is what ought
to result - when #248 is given 10th then #89 should move down to 11th.
But, I think the PC has to be specific. And, as a scorer, I’d always ask
for confirmation. As a PC Chair (my usual role), I am always specific
about what to do with the score for #89 because a scorer should never be
faced with this quandary.