Hi, I am trying to set up a progressive handicap system using the external excel file. I have found the NHC file in the sailwave examples folder, but I can’t work out how to get Sailwave to populate the file. I think it can see the file because when I run the scoring it comes up with a box with Sailwave Helper in the corner with the series name and fleets etc. But is uses the VYC ratings for the results rather than a NHC type rating.

For information, we are sailing dinghy fleets (Mirrors, Sabres, Open class), with two starts, one for Mirrors and Sabres etc and one for Open class. We are using VYC for the mixed fleets. However we also want to have progressive handicaps so the beginners can get recognised for their improvement.
Tony
Deviot Sailing Club, Tasmania

First thing to do is test with the sample NHC file (NHC2014.blw) in the examples folder

Click rescore and make sure it all works - Press F6 then R and it will display the ratings used for each race.
This is using a built in method to calculate the NHC ratings and not the Excel Spreadsheet
Now go to Scoring system and the Rating system tab

and select the external debug mode 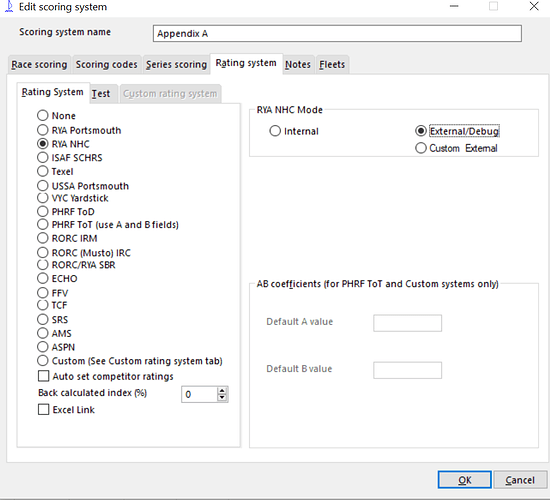 There is a tick box Excel Link which when ticked allows you to specify your own template file rather than use the standard supplied with Sailwave.

Let me know if you need more help.

Thanks Jon, I’ll try this tomorrow and let you know how it goes
Tony

Thanks Jon,
I’ve got it working with aliases. I’m getting some error messages as it calculates, but the results appear to be correct.
Tony

You shouldn’t be getting any errors if you would like to email me your Sailwave file (.blw) I’ll have a look at it for you

Hi Jon,
file attached. I think the errors may be due to the ratings stored for some of the non-alias competitors.
Thanks in advance.
Tony

I also notice in Race 3 45272 had a time of 2 hrs better than the other competitors which made the Ratings jump a very unusually large amount so I made them a bit slower - I appreciate they were only random times you had entered.
The more in the fleet the better it can adjust them as it has to determine what is normal

Thanks for that. I didn’t realise that I had to enter starts for the alias fleets. I’m not sure how those ratings got in there, and I couldn’t work out how to delete them! Yes the times were a bit random. I’m chasing up some real numbers to work on, but once I get the structures right the rest shouldn’t be too hard.
Tony

Hi Tony
To delete over-ride ratings Highlight the cell with the rating you wish to remove and press Enter then select the ratings tab and delete the rating value using Backspace - press enter. Sailwave will now remember you are editing ratings so to delete others
Use the arrow keys to move to the required cell. Press Enter - Backspace - Enter and you have deleted that cell - repeat this line as necessary
In practice this is very quick move the cell then Enter-Backspace-Enter as necessary

In our club we have a similar request from our Squib fleet. They wanted a one design result as well as a progressive handicap result. My solution was to set up two fleets (Squibs One Design and Squibs Progressive). Each boat was in both fleets and I used aliasing to link them together. For both fleets I set an initial handicap at the start of the season for each boat of 1.000. For the Squibs One Design fleet the rating system was a standard TCF. For the Squibs Progressive I used the swecho.xls template to progressively adjust the handicaps. The only thing that was a bit weird was asking the race office to take times for a one design fleet and I entered a finish time for each boat rather than a place. Each week the progressive handicap adjusted so as the season went on very different boats were winning in the progressive fleet than won in the one design fleet. It worked really well for us.

I’m not getting any errors, but am getting some strange behavior. The calculations work for the most part, but then for numerous racers, after a certain point their rating changes to 0 for all subsequent races. It works for the same racer at earlier points, but then seems to stop even though elapsed times have been entered.

Is there a limit to the number of races and competitors? I have 40 racers in a series of 85 races.

Jon
I did send this a few days ago but it appears not to have sent.