We rate on both NHC and TCF

Have now created 3 aliases for each boat (overall NHC and TCF: within division NHC and TCF).

Would appreciate your help and have attached relevant file

Try the attached file which I hope is what you are looking for.

Let me know if its all OK now

It fixed the problem of fleet scoring but given the reset of NHC each series probably need to investigate and increase the rate of adjustment at the top end to spread the individual race glasses (1,2,3) around other competitors in a 7 race series eg VX one in Division 1 starts at base rate of .875 and in race 7 NHC has risen to .907 before resetting for new series to .875.
Have tried to create the suggested ini file on the same folder as SWhelper but on right click can only create a new folder. So please can you tell me how and how to enter the data suggested ?

I’m not sure I understand what you are saying why are you resetting the NHC for a new series?

As for creating the .ini file just use Notepad or your favourite text editor. But are you sure you want to change these settings if you are carrying the ratings forward?

Very impressed with your interest in our concerns. It is very much appreciated

The wind conditions in the river are variable both in gusts and direction. Another constraint is shallow waters on rivers edge. River Current (flow) is almost non existent but the wind can create flow
There are 4 clubs actively sailing in the general locale.
The largest of which is Goolwa Regatta Yacht Club. They have analysed results over many years of sailing and have come up with a rating (GMFR) for a Mixed fleet of competitors, racing in the types of courses generally raced in these waters. I think you could describe the type of races as passage (sailing along the river and lakes to location eg Goolwa to Milang, Milang to Goolwa, Goolwa to Meningie, Goolwa to Finniss , Goolwa to Wellington etc ) or single circuit (generally in the river with a course depending on wind direction and certainly not the sort of courses you see in the Sailing Rules. Goolwa reset for each series as they have found that it is between series is when things change (new sails etc). They revise the handicap maybe a couple of times a year (with very little change). They also score on a progressive handicap system for members of their club
The handicap values (GMFR in effect a TCF based on local conditions) they have developed have been adopted by all 4 clubs racing in the area. There is a lot of crossover of competitors between clubs (hence we score on a TCF that facilitates this)
Boats that race in our club are also scored on the NHC.
We have passage races (the 7 race Redtop Long Series and the RAT RACE regatta , One Design New Year’s regatta) and The 7 race Red Top Sprint Series (close circuit around 3 marks in the Red Top Bay ,
We score and award race awards based on NHC and also for information(for interclub racing) on TCF (GMFR).

With a changing GMFR (the base handicap for NHC) this can penalise a boat with a c/f NHC compared with a new entry. Eg: Farr 6 that started racing when we started using SW NHC started at a Handicap of .640 and a number of these boats under one division (sports and trailer sailers) due to disparity of boat types now have aNHC below .640. New boats enter at a GMFR of .675 and they haven’t got a hope of getting a place in a race and it is these new boats we want to attract to our club. We adopted NHC to spread the race positions around rather than the better sailer always getting the glasses.

I can get over the disparity of performance by having a sports boat division (TCF .745+>) and a trailer sailer division (<.745) which will also make for safer sailing. This would need a reset in any case as it is a different racing cohort. But any outside boats competing in a full series would not be eligible for a race glass unless we reset at the beginning of each series)
However we have a very successful international who doesn’t really want any more glasses but wants to compete. IF i can increase the rate at which the handicap increases on winning this would be great as he would be able to race and enjoy it rather than only compete in one less than the minimum series races (refer Serial Pest in the file sent last night)
The same applies to the Trailer Sailer division but to lesser extent

Jon a long winded answer to your question Why?

When you start a series using NHC there is a default rating for the boat which goes in the rating field. The rating used for the first race is the default rating unless you specify one for R1. The default rating is still used within the calculations but it is the R1 rating that is going to have a major effect.
The RYA recommendation is that you should carry forward the rating from a compatible series if possible these ratings are entered as the rating for R1
So let’s say we have had a Spring Series with 8 races Sailwave will have 9 races in it, as Race 9 will contain the ratings for the next race. So for the Summer Series, you would copy the Spring Series File and delete races 1-8 this will then leave R9 of the spring series as R1 of the Summer series. There will not be any results in this race to start with but there will be ratings.
This generally works well the only problem is new boats joining will use the Default rating. Sometimes a committee will decide the rating to be used for boats joining a series if there is sufficient data on their recent performance

By all means, you can change the adjustment factor but if you make it too large then the ratings swing back and forth.

If you do wish to change the adjustment factor this is easily done with Sailwave using the .ini file described in another post.
I would advise taking a set of results from a previous series and experimenting with the Adjustment factors to see if it produces the results you are looking for

I thank you again

Don’t you ever sleep!

Will try a few adjustments as you suggest

Jon
Have created an text file as suggested by you and named it SWHelper but dont know how to get the .ini file type on saving
Have saved the copy to the Sailwave program file (screen shot attached) where it is shown as text file
In the rating area I entered the file name SWHelper.ini on bottom left even though I dont know how to get the ini extension . It appears to be looking for an Excel file
On the Right hand side I tick Internal: see another screen shot 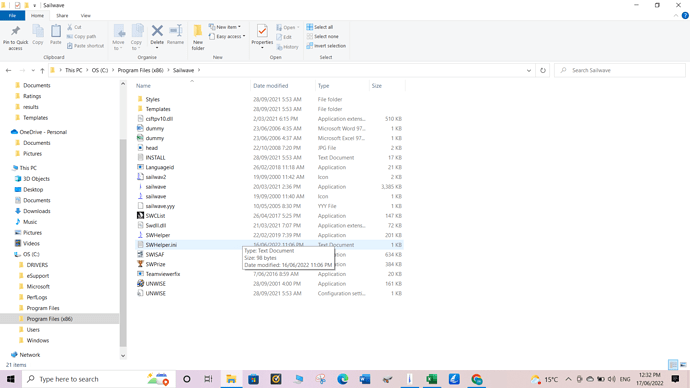 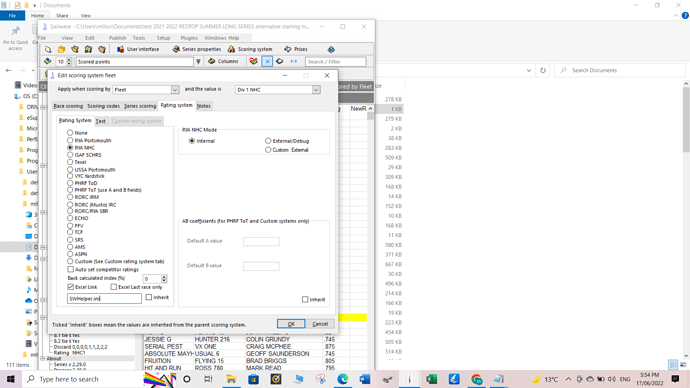 From the screen shot you have already named it as a .ini file

If you see that, rename to SWHelper.ini

Thanks for your help
managed to rename the ini file extension based on your suggestions
Got over an administrator problem by making the change from a text file outside of the program 86 file and then copied it over the text file in the 86 programs file. Found that I cannot change the values in the ini file when it is in the 86 file (requires admin approval) but can by following the procedure above (in an outside folder)

But I still can’t get it to work
How do I get SW to refer to the SWHelper.ini file or is it inbuilt into SW?

Is there still a limit on how far a progressive handicap can exceed the base handicap?

I have been trying out the excel NHC3 NHC4 files and do not seem to be able to make them work
Have changed the ratings as appropriate to NMC3 or NHC4
In what folder should these files reside (have tried global/ratings to nominate where they are but that does not seem to work)?\

Is there still a difference between regatta and Club NHC calculations?

The SWHelper.ini will be used automatically if it is found in the directory

If you want to use the external mode with Excel 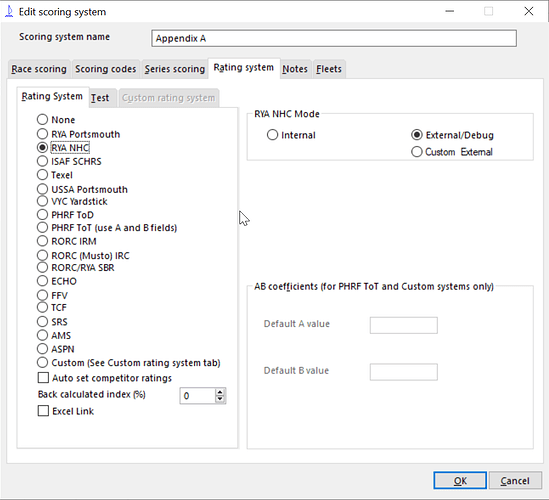 Select External as above this will use the template C:\Users\Public\Documents\Sailwave\Templates\SWNHC3.xls

But you should store your modified version in the user area C:\Users\Public\Documents\Sailwave\Templates

and ideally, name it different e.g. SWNHCMS.xls
then use a setting such as this 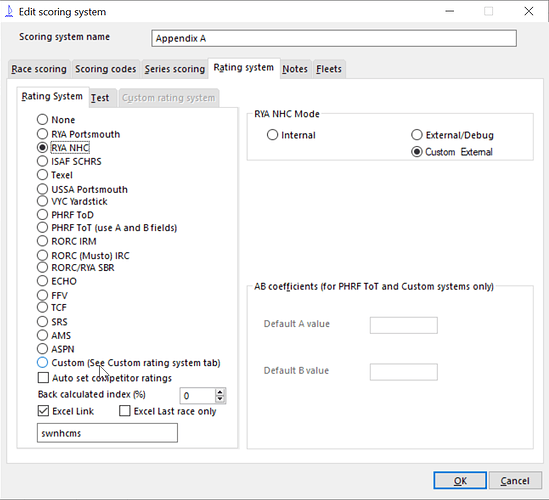 If you are using the external mode when you score does Excel open with the first race displayed?

Club NHC was discontinued by the RYA many years ago but if it suits you, then you may still use it but it has to be in Custom mode - Yes it is quite different

What version of Sailwave are you using?
I ask because Club mode has been removed for many years.

Using the latest version all the time (checks whenever SW opens)

I presume the swnhcms would be in the ratings file as specified in global options (or in programs file 86 or both?)

Latest full version is 2.29.0 but there is a 2.29.6 .exe only version available from the Sailwave User Group

You should store the SWNHCMS.xls in the templates folder as per my previous email

I have used 20/21 results with a new starting point and then carried them forward to 22/23 (using the same elapsed times) using a revised ini file , which I dont think is working.

The objective is to have a handicap system that brings the VX One into the fleet to enable others in Div 1 to win races while enabling the VX to sail all races in the series.
Everything I try leaves thec VX winning the 3 entered races in 21/22 and 22/23

Thank You in advance

correction:
have used 21//22 results with a new starting point and then carried them forward to 22/23 (using the same elapsed times) using a revised ini file , which I dont think is working.

Unfortunately, I’m at the 29er European Championship currently - At the moment I don’t have a desk or WiFi but I did test it using mobile data and it works as I expect

You will need to have Administrator rights to store the SWHelper.ini file in the program directory. Easy way is to store the modified file in a documents directory and then copy it to the proper location using the windows File Explorer as this will prompt you to give you admin rights

Have revised the ini file as attached and as advised by you and placed it in the Programs 86 sailwave file
Tried it on the SW file I supplied to you but no change
The VX started in DIv 1 NHC at .875 and ended with a new rating of .907 after winning the 3 races entered ( of a 7 race series) in the 21/22 year
Using this same sw file and renaming it to 22/23 and retaining all elapsed times but changing the HC for Race 1 to .907 , rescoring and the new rating rises to .930 and still wins the 3 races entered
have attached the 22/23 file and the 21/22

Enjoy your regatta
Depth of winter here, EOFY and cattle to feed & inject , calving starts soon, so lots to do